The large Hyacinth Macaw Anodorhynchus hyacinthinus is a majestic beauty. Visually it appears to be the largest parrot in the world. But that is not quite so. The elongated body of the Hyacinth reaches about 37' (95 cm) in length and it has an impressive wingspan up to about 42 inches across, which is the most expansive parrot in the world. But the Hyacinth is not all that hefty, it only weighs up to about 3.7 lb.

The worlds largest parrot is actually a flightless, ground-dwelling bird. It is the species Strigops habroptila, commonly called Kakapo which means night parrot. This hefty bird only extends to 24' (61 cm) in length, but in weight a mature adult can be up to 9 pounds (4 kg)! The Kakapo is endemic to New Zealand and is quite a pretty bird in its own right. Rather than being blue like the Hyacinth, it is a yellowish green color mottled with dark stripes and spots giving it an owlish appearance. Its scientific name actually means 'owl-faced soft feathers'.

The beautiful Hyacinth is pretty much an all blue large Macaw. The rich cobalt blue of its coloring is what influenced its name. It is a calm Macaw and known to make an excellent pet. Hyacinth Macaws have a very even temperament. They are sweet, extremely gentle, and are not inclined to make a great deal of noise. They are affectionate and playful, and become quite attached to their human families. 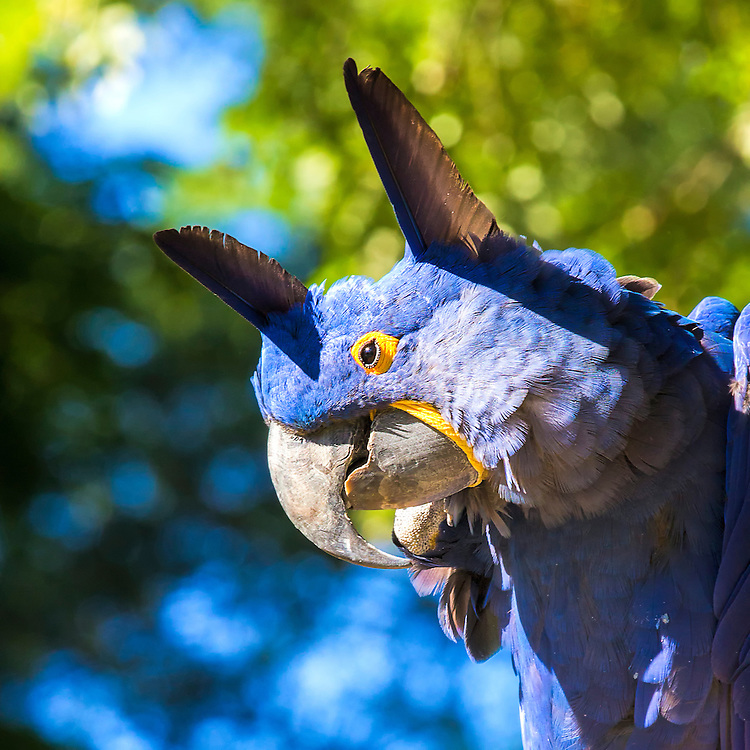